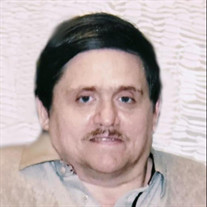 Donald L. Johnson “Donnie”, age 59, of Lakemore, Ohio, went home to be with the Lord on February 18, 2021. He was born on November 10, 1961 in Clarksburg, W.Va., the son of the late Ronald and Linda Lee Johnson, and sister of LaVaughn J. Johnson. Donnie is survived by his loving son, Jeffrey D. Johnson; friend, Rebecca; brother, Ronald; other family and friends; and Frizzal, Rello, Duchie, GiGi and Riot, the family dogs. Donnie was a member of Akron Springfield Assembly of God Church. He went to Garfield High School and attended the University of Akron from 1995-2005, graduating with very high honors and receiving multiple awards and academic achievements. Donnie was vice president and president of Phi Theta Kappa Honor Society of the University of Akron. Football was his passion and music and family were his loves. There will be no services or visitation. Memorial contributions in honor of Donald L. Johnson may be sent to Hopkins Lawver Funeral Home, 547 Canton Road, Akron, OH 44312; or Akron Springfield Assembly of God, 1551 Canton Road, Akron, OH 44312. The family request no flowers. (Hopkins Lawver, AKRON, 330-733-6271) www.hopkinslawver.com

The family of Donald L. Johnson created this Life Tributes page to make it easy to share your memories.

Send flowers to the Johnson family.